Knight Frank has analysed the size of currency discounts in the 4.5 years since the Brexit vote, to show the exact day on which investors denominated in a range of currencies would have achieved the maximum discount in prime central London (PCL) property.

The full table of percentage discounts can be found below

When was the best time to buy in PCL following the Brexit vote?

An unmistakable sense of déjà vu surrounds Brexit talks as we approach the end of the transition period on 31 December.There are strong echoes of the final months 2019, without the drama of a razor-thin parliamentary majority in London but with the added urgency of a global pandemic.

It is precisely because the stakes are so high that more economists believe a deal will be struck, even if it merely avoids a no-deal cliff-edge. It is why Goldman Sachs has urged investors to buy the pound in recent weeks. “The Brexit process has been in a quieter, more technical phase, and that is good news for the prospects of an eventual deal,” the Wall Street bank said.

Savvas Savouri, chief economist of hedge fund Toscafund, went further. “We are swiftly moving to a point of reckoning when Brexit becomes a done deal and the pound can rise to its proper level of circa 1.30 against the euro and buys circa 1.70 US dollars.”

The pound was trading at $1.33 US dollars on Friday morning last week.

With a timetable that could move quickly in coming days and weeks, overseas investors may see their currency discount erode. Savouri says any currency movement could be sudden, pointing to the dramatic impact the referendum result had in June 2016.

We have analysed the size of currency discounts in the four-and-a-half years since the Brexit vote, underlining the scale of the opportunities that may begin to disappear. The below chart shows the day on which investors denominated in a range of currencies would have achieved the maximum post-referendum discount in prime central London (PCL). The figures also take into account property price changes in PCL over the period. 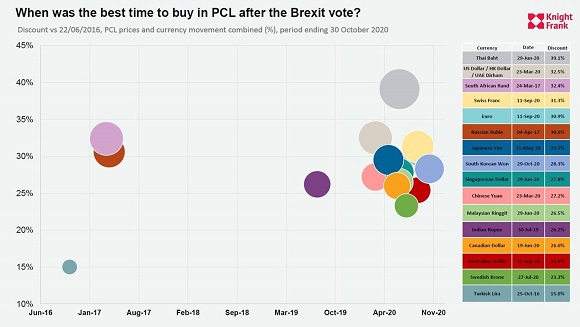 Compared to the day before the EU referendum, a buyer denominated in Thai Baht would have benefitted from an effective discount of 39.1% if they had bought on 29 June this year. That was the largest such discount of all the currencies analysed.

Discounts in excess of 30% have also been available in a range of other overseas currencies, including the US dollar, Euro and Swiss Franc. The optimal timing for the transactions differ, with some currencies being stronger versus the pound several years ago, including the South African Rand and Russian Rouble.

For the majority of currencies, the pandemic produced the biggest currency movement over the period, with the pound dropping to $1.15 against the US dollar on 23 March of this year.

Meanwhile, the South Korean Won has provided the most recent buying opportunity. Indeed, the Won has strengthened since the end of October (when the current PCL data ends) on the back of hopes for a Covid-19 vaccine

International buyers have many factors to think about as we have previously analysed, including travel restrictions and a 2% stamp duty surcharge in the UK from next April.

However, the potential for a Brexit deal is an increasingly important consideration.

Knight Frank Research provides strategic advice, consultancy services and forecasting to a wide range of clients worldwide including developers, investors, funding organisations, corporate institutions and the public sector. All our clients recognise the need for expert independent advice customised to their specific needs. © Knight Frank LLP 2020. Terms of use: This report is published for general information only and not to be relied upon in any way. All information is for personal use only and should not be used in any part for commercial third party use. By continuing to access the report, it is recognised that a licence is granted only to use the reports and all content therein in this way. Although high standards have been used in the preparation of the information, analysis, views and projections presented in this report, no responsibility or liability whatsoever can be accepted by Knight Frank LLP for any loss or damage resultant from any use of, reliance on or reference to the contents of this document. As a general report, this material does not necessarily represent the view of Knight Frank LLP in relation to particular properties or projects. The content is strictly copyright and reproduction of the whole or part of it in any form is prohibited without prior written approval from Knight Frank LLP. Knight Frank LLP is a limited liability partnership registered in England with registered numberOC305934. Our registered office is 55 Baker Street, London, W1U 8AN, where you may look at a list of members’ names.