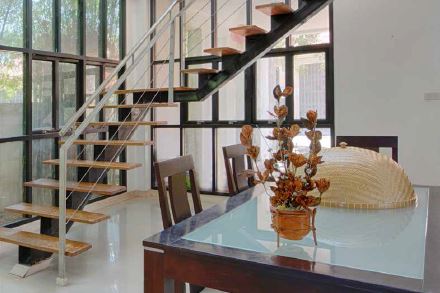 Although residential rentals only get surveyed again in the September CPI (Consumer Price Index) survey, it is worth while considering this key component’s possible near term future trend.

One of the key ratios watched by property analysts for signs of an “over-valued” residential market is the Price/Rental ratio. The reasoning goes that the higher the property price relative to the going rental, the more attractive it becomes to rent rather than to buy. Therefore, the higher the Price/Rental ratio becomes, the less the demand for home buying and the more the desire to rent. Ultimately, this should lead to a downward correction in house price levels, or at least house prices in real terms, accompanied stronger rental inflation, which should lead us back to a lower and “acceptable” Price/Rental ratio.

According to this simplistic approach, one should see South Africa’s rental inflation accelerating, and possibly being quite strong at present, because our index for the House Price/ Average Rental Ratio (where 2000=100) remains relatively high by historic standards and has risen in both 2012 and 2013 as house price inflation outstrips rental inflation.

However, as yet we have seen nothing more than a marginal move upwards in actual rental inflation, from a low of 4.26% year-on-year in mid-2012 to 5.16% by the June 2014 CPI survey, with house price inflation still outstripping rental inflation of late, and our Estate Agent Survey still pointing to a high percentage of 1st time buyers piling into the home buying option. 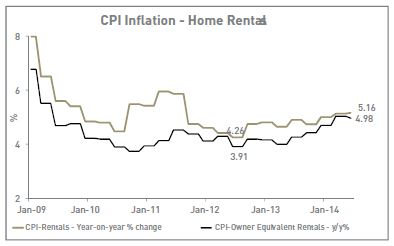 The reason for buying still apparently trumping rental lies in the cost of credit, and the trend in a perhaps more relevant home cost/income ratio. As the home buying market is a highly creditdependent one, we include the cost of credit in our Average Priced Home Bond Instalment/Average Rental Ratio Index. Here it becomes more apparent why to date we have seen limited acceleration in rental inflation in the residential market. The Instalment/Rental Ratio Index for 2013 moved more or less sideways from 2012, kept down by the last interest rate cut having taken place in the latter half of 2012. In addition, this index was a massive -40.4% down on the 2008 level due to the sharp drop in interest rates post-2008.

Therefore, while home prices relative to rentals not appearing overly attractive given that the House Price/Rental Ratio Index is still high at significantly above levels of early last decade, it is the extremely low cost of credit of recent years which keeps the home buying option a popular one relative to renting, thus containing the magnitude of the rental inflation acceleration to date.

The implication is expected to be some moderate rise in the CPI for Residential Rentals and Owner Occupied Rentals, pushing these key components inflation rates to beyond 6% in 2015. While not extreme, the gradual rise in residential rental inflation means that this component of the CPI is shifting from having been a positive contributor to what was a low CPI inflation rate a few years ago to being more a “part of the problem”.

This also raises the question as to whether residential rentals should be included in the CPI measure on which the authorities base their interest rate decision, because the sometimes positive correlation between rentals and interest rates can mean that rising interest rates sometimes push this inflation category higher. 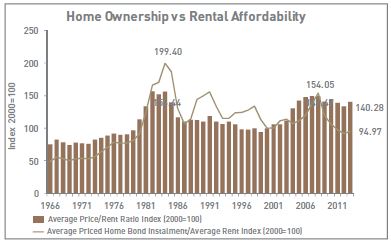 Finally, to get a long term perspective, we use the ABSA House Price Index and a rental deflator derived from SARB household consumption data, to produce the 2 Home Buying Cost /Rental Ratio Indices back to 1966. The House Price/Income Ratio Index remains very high by historic standards, causing concern amongst some that house prices must be due for a major downward correction at some point. It hasn’t happened in a big way yet, due to the low interest rates that translate into a Home Instalment/Rental Ratio Index level that is at its lowest level since the late-1970s.

The SARB’s apparent intention to “normalize” interest rates, which we interpret as raising them to a level where the Repo rate is once again positive in real terms (above CPI inflation rate), however, and this looks set to raise the Instalment/Rent Ratio, which should be the catalyst for the renewed slow decline (“correction”) in real home prices.